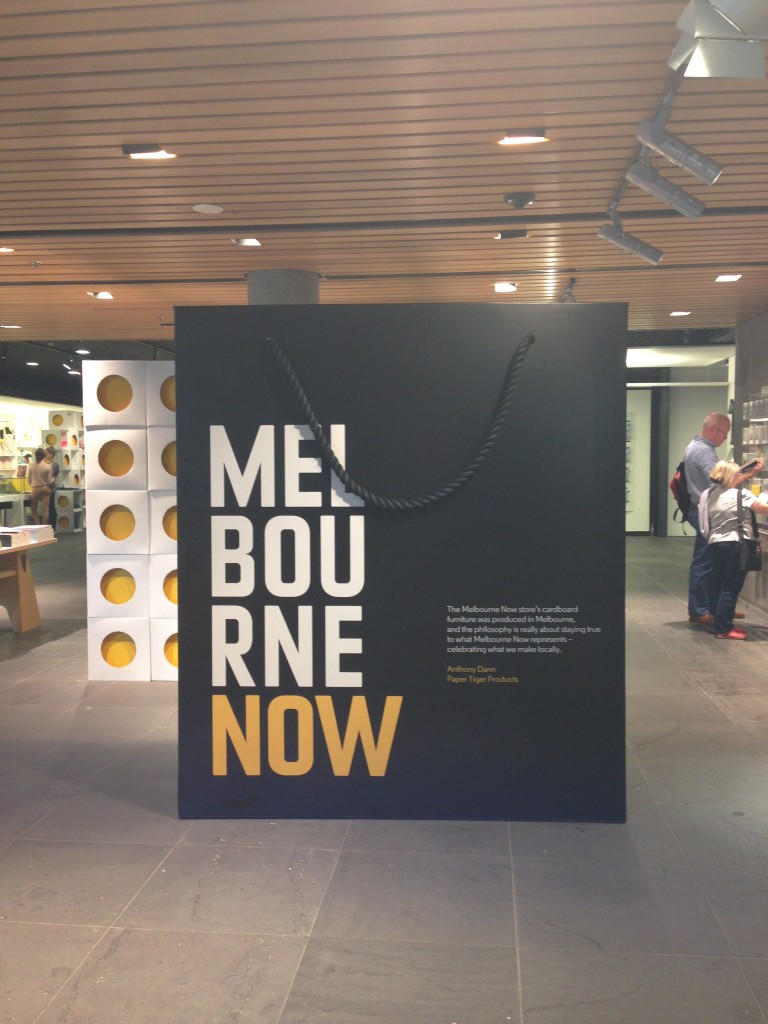 I love Melbourne, and the latest exhibition Melbourne Now reinforces all the reasons I love this city. An exhibition that celebrates Melbourne’s past, present and future.

I attended both sites of the exhibition and started at the NGV on St Kilda Rd. You know, the one with the water on the windows.? My favourite. I had initially gone to see the Art Deco clothing exhibit but when I walked in the gallery doors I was coaxed by the public iPads and table tennis table at the entry to Melbourne Now. I had to investigate further!

I was lead through the galleries by colours, attention grabbing headlines and statements, mind blowing artwork and just general awesomeness. There was so much to see and I wanted to savour every bit of it. One of the stand out pieces to me was a display of old tea-towels from the 60′s-80′s that had tag lines painted over them to fit in with the existing artwork so they took on a whole new meaning. They were really impressive. Such a simple idea made a hugh impact in me. 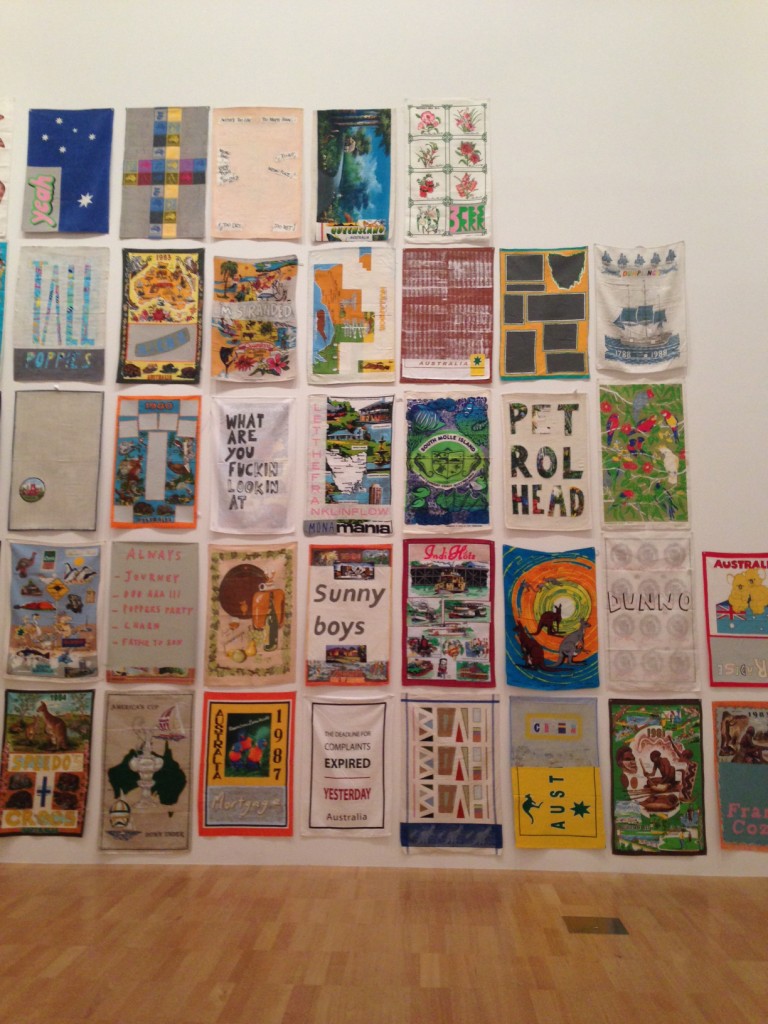 The Melbourne Now tea towels! I think my Mum had a few of those when I was growing up.

I also loved the video of all the inner city Melbourne lane way’s all morphing into one, like a never ending lane way! That was really cool.

One of the great things about Melbourne and being a Graphic Designer in this city is that there is inspiration everywhere and always something to do. About mid-way through Melbourne Now you could take a survey on how we might design our future city. The survey included topics such as better public transport solutions, sustainable homes and recycling ideas, events in the city, how to become the number one city in the world, do we want to be the number one city in the world?, how do we feel about urban sprawl and ‘Mc Mansions’ in the outer suburbs. Once you filled in the survey there were cards in stands on the facing wall that included some previous answers that you could take home. Im not sure what they are doing with the data collected form this but I do hope that our answers get through to some desicion maker and a difference is made. 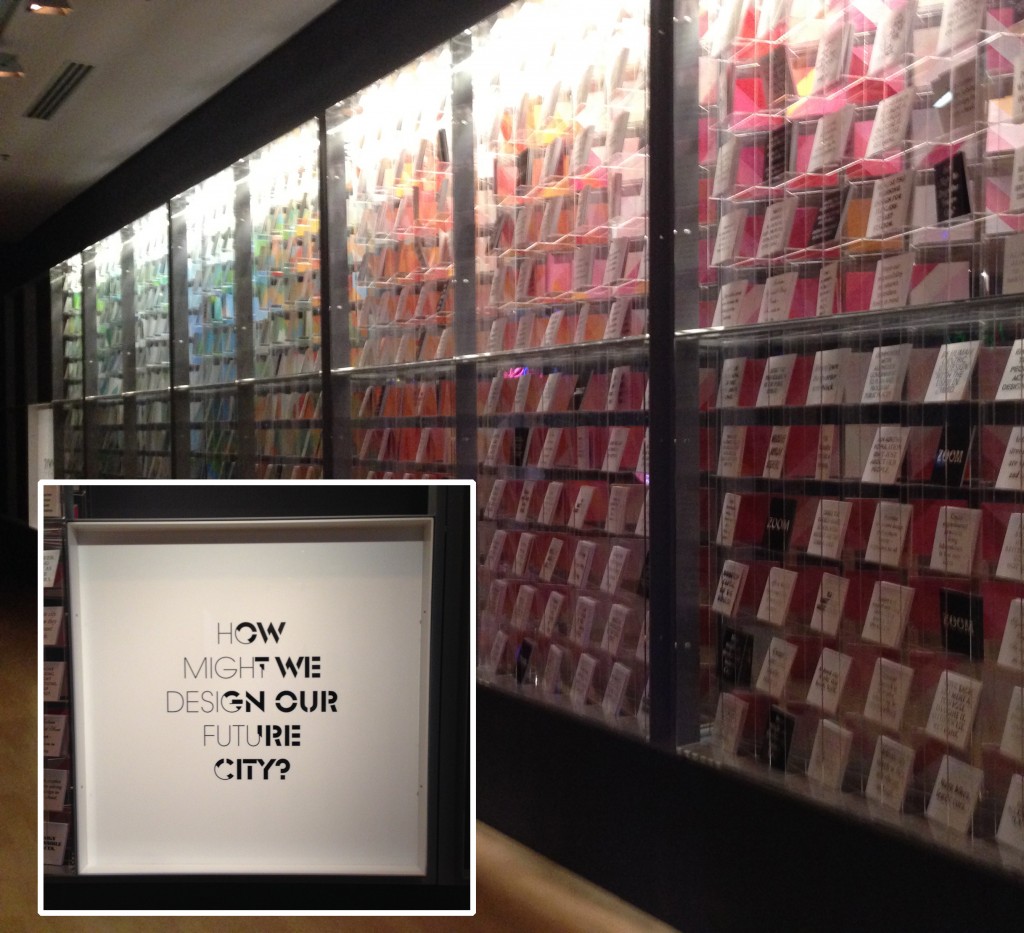 Sustainable living and recycling was a big issue for me. 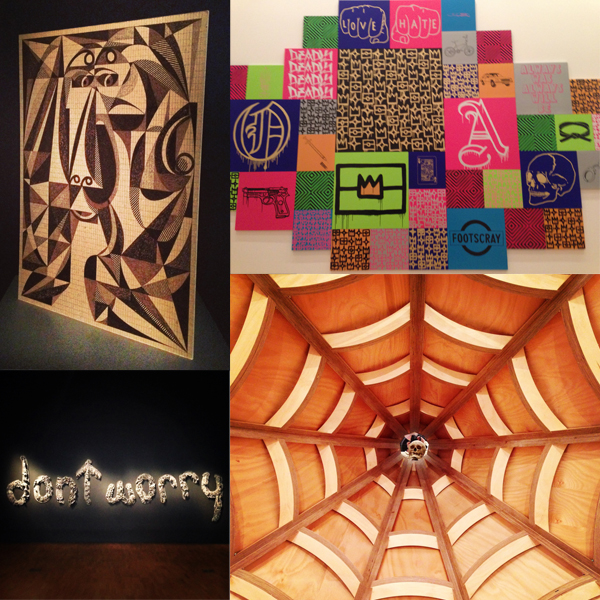 Some of the diverse things you can see at Melbourne Now

I went through the rest of the exhibition which included the dance floor, the skull gramophone, adding my bird to the flock, interactive installations and the gift shop, then bid my farewell to the NGV feeling inspired, energised and truly happy to live in the city of Melbourne. 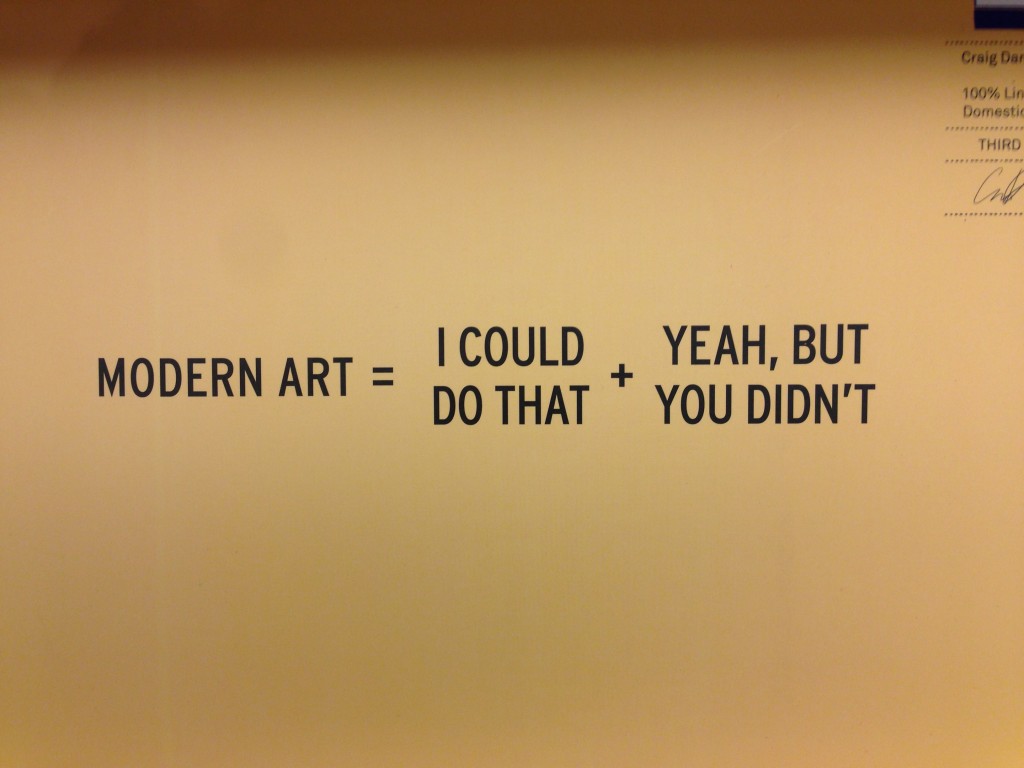 I LOVE this so much 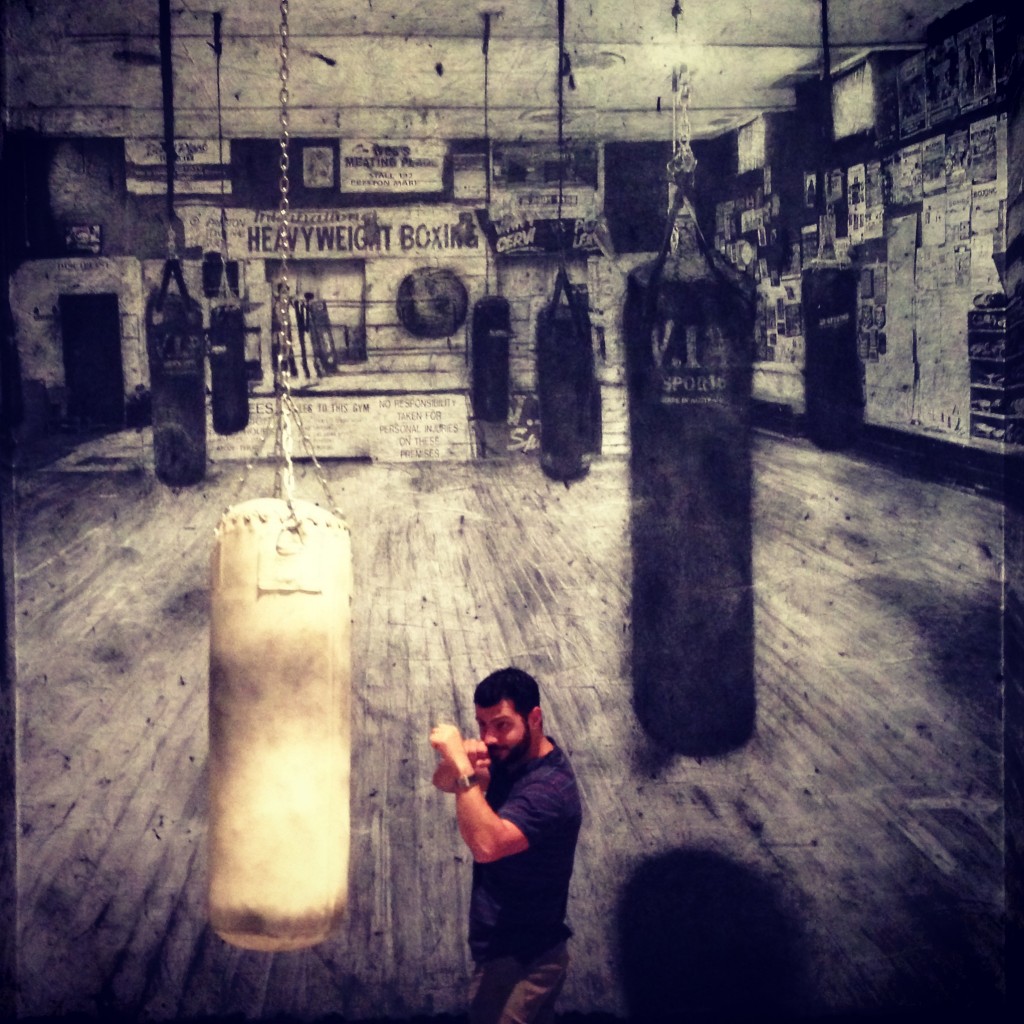 The boxing installation at Melbourne Now, complete with Deepheat!

I returned a few days later with my husband in toe to see the second site down at Federation Square. Equally impressive as the NGV site with new and different pieces of artwork and design ideas. One highlight was the boxing installation in which you could smell the Deepheat before you saw the installation! So clever to include all the senses. Another stand out but simple piece was the old phone book friction trick. If you haven’t not seen this before check out this video. You will never get them apart!

I was also really happy to see Melbourne artist, Penny Bryne, have a wall there with her amazing political porcelain figures on display as part of iProtest. I’ve been following Penny since I saw her documentary on ABC a few years ago and just fell in love with her concept. Check her out here.

Another highlight was the de-gustation  installation, not for the faint hearted! An eery room of luxury set up banquet style with taxidermy calves, chickens and cows waiting on silver serving ware. That was weird, but I loved it. 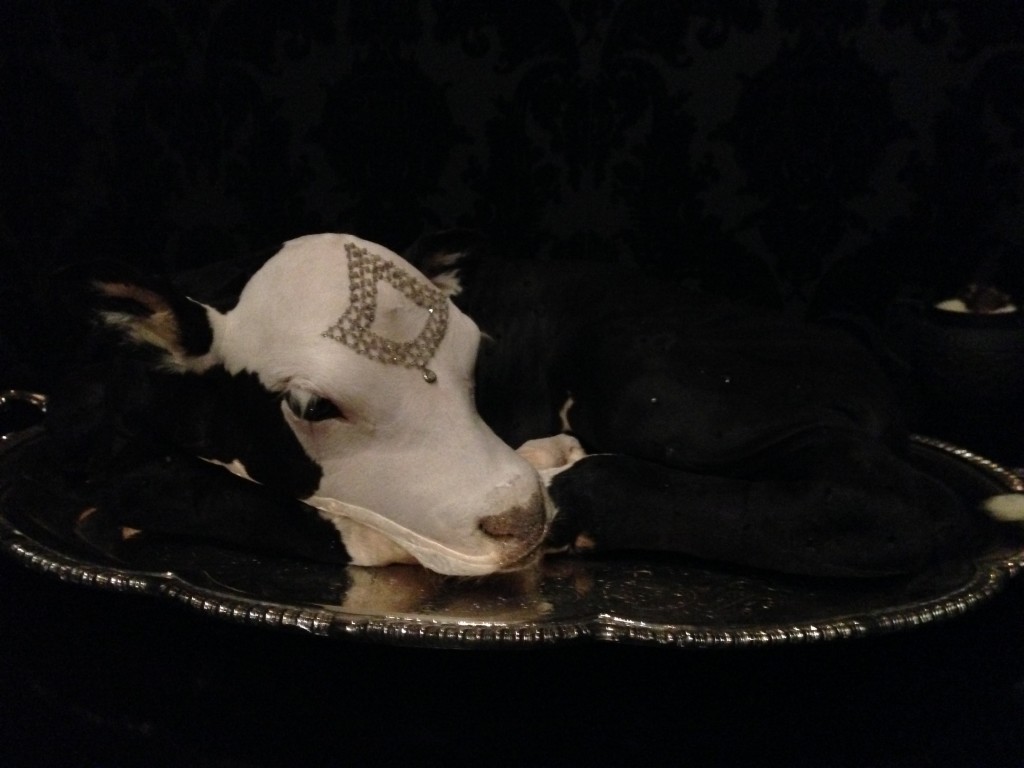 Taxidermy lamb at Melbourne Now. I even had the opportunity to sketch him.

I would highly recommend checking this exhibition out. It’s on until the 23rd of March 2014. Find out more details here.

P.S. I was also really happy to see people clicking and posting using the hashtag #melbournenow.  Seeing what other people enjoyed about the exhibition and how many posts there were added to the experience. I would happily live this exhibition over and over again. 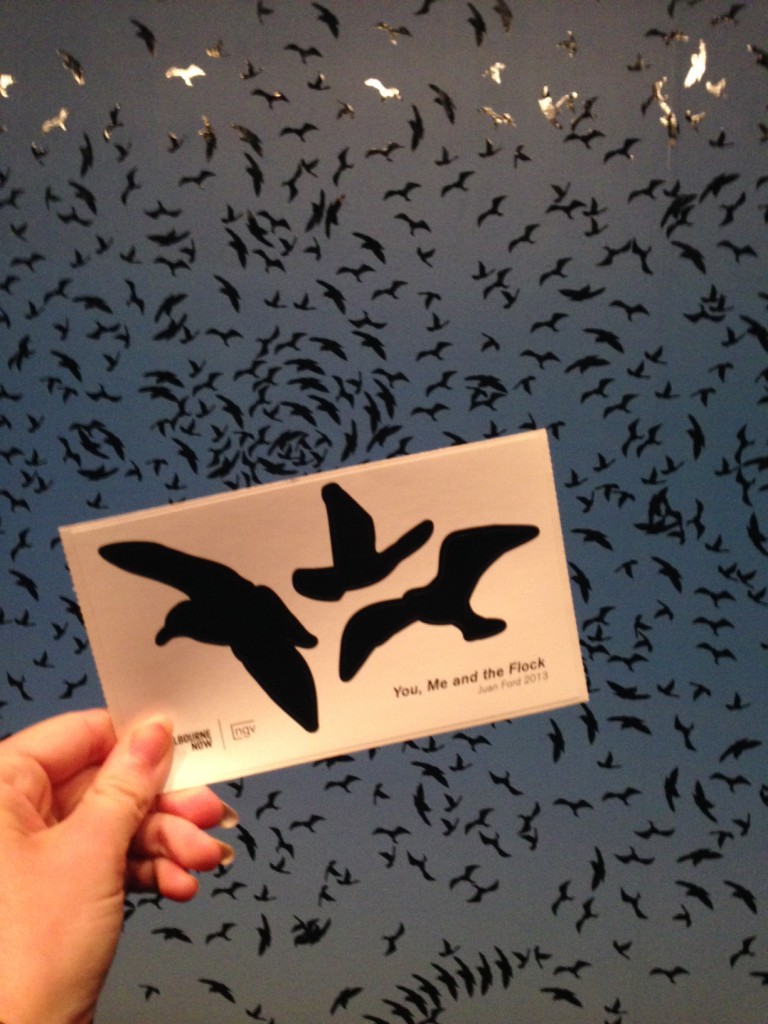