Above is the YouTube campaign we initially designed and created for Fight Free February back in 2011.

Fight Free February began in 2011 as the brainchild of CE Family Lawyers. The aim was to create an annual campaign–¬ starting a movement of individuals committed to finding alternative methods in resolving difficult situations. People are asked to make a pledge for a fight free month (February of course!), and via the FFF Website, Facebook page and Twitter, they are offered tips and information about how to resolve conflicts without resorting to fighting. 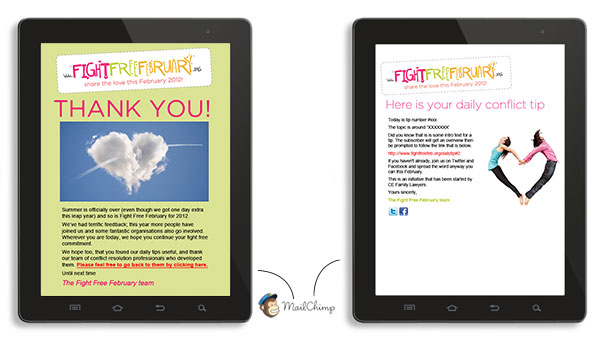 Mailchimp campaign delivering daily tips for the month of February 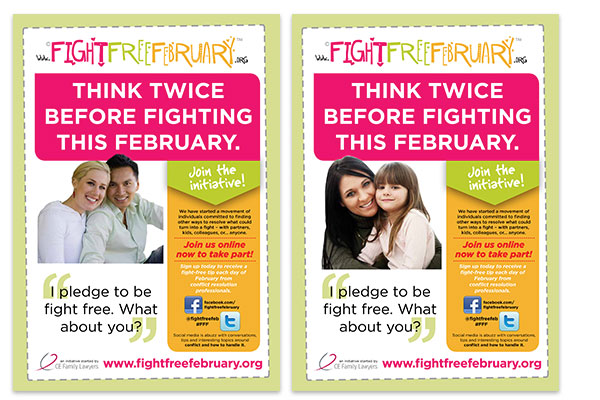 Promotional posters for local businesses to spread the word about FFF

This ‘feel good’ initiative begged a light-hearted, bright and friendly design– inspiring us to promote Fight Free February in a way that appeared easy-to-read and accessible to all.
We have designed the FFF logo, website, branded their Twitter and Facebook page, as well as producing numerous posters, brochures and flyers– all designed to spread the word on this fabulous initiative. 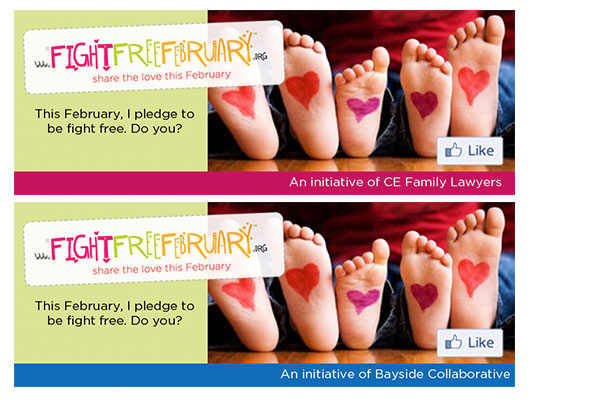 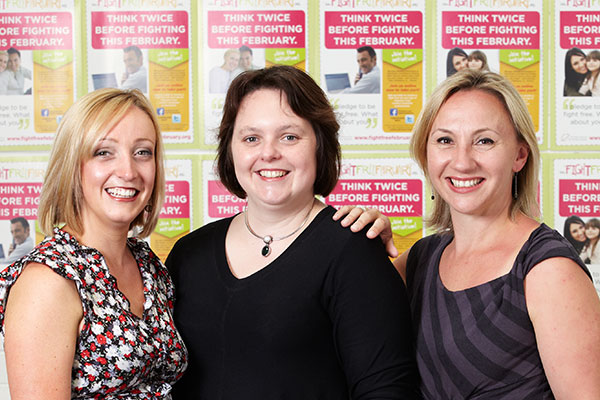 Our goal was to great an overall branding identity for Fight Free February, with emphasis on social networking and appealing to a broad range of people. We wanted everything to feel highly accessible– Fight Free February is all about resolving issues without fighting, so a friendly approach seemed more than appropriate. Lime green, tangerine orange and magenta (the same shade used at CE Family Lawyer– check out their Graphic Design package here), became the FFF colours, exuding a sense of free-spiritedness and childlike fun. 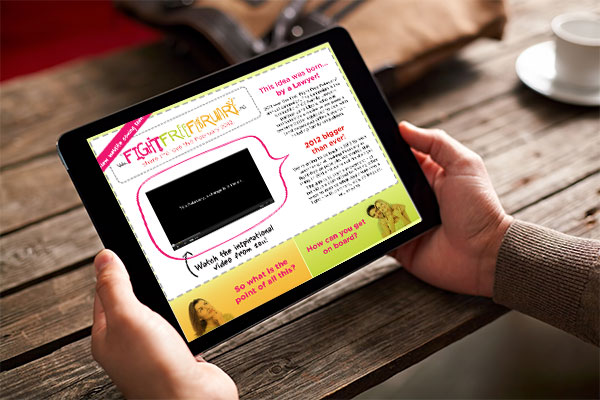 We think the site will act as a great launching pad for this new campaign, providing information and plenty of links to FFF various other social networking platforms.

Fight Free February puts quite heavy emphasis on social media and utilises networks such as Facebook, Twitter and YouTube to spread the word about their initiative. We kept this in mind when creating the FFF Website, incorporating live streams from Facebook and Twitter and numerous YouTube videos. The site itself is easy to navigate and simple, maintaining the friendliness and accessibility we introduced in the logo design.

MORE PORTFOLIOS YOU MAY LIKE TO VIEW View Our Portfolio +
Top