Too Hot for the Web 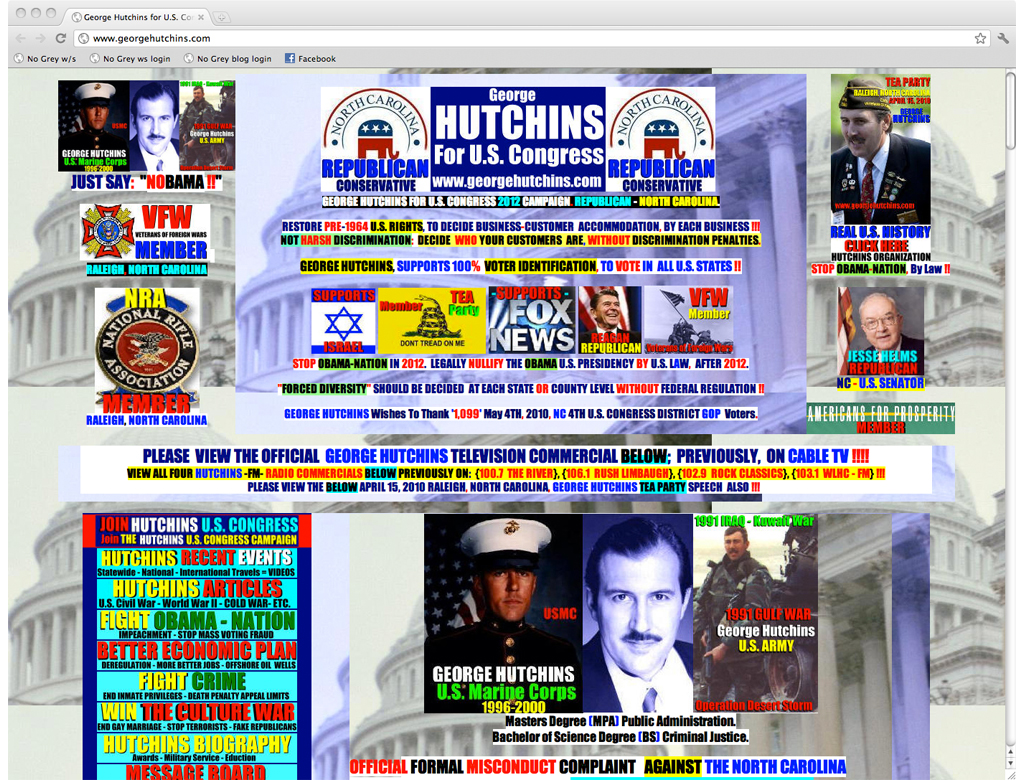 The following site (or sight) may cause viewers to suffer from the following symptoms:  acute headaches, mild confusion, extreme disjunction of thought and upmost distraction. If you suffer, or are prone to epileptic fits, please, for your own health and safety, refrain from scrolling down. George Hutchins is online – and, golly gosh, is he making his presence known!

This over-the-top overtly colour-blazon site, raises many questions regarding the role of websites, and the how important it is for a business – small and big ‘to have a ‘good’ functioning website. Although George Hutchins’ sight attracts a surprising amount of traffic (the stat counter is ablaze because its popularity is just so hot!), one would question just how much it is actually benefitting Hutchins’ campaign. I would love to know; from the hundreds of thousands of hits, how many are from interested parties (I am not referring to the celebratory kind), and potential voters. I am of the opinion, that like myself, majority of the visiting individuals are simply checking out the ‘ugliness’ of the site- for amusements sake. I even considered posting something on my Facebook page along the lines of, “Check out this ugly site. Epileptics BEWARE!”

I have now, for research, of course, visited the site a number of times (it is actually open on my desktop as I type), but can honestly say, have not read a word. So overwhelmed by the confusion of type, colour, imagery and flashy highlighter-esque strike-throughs, I am totally incapable of deciphering any copy at all. Surely this is an issue.

This prompts me to ask, why do business/people need websites? In particular, what is George Hutchins trying to achieve in having a page on the web? If it is merely to attract attention (be it productive or not to his campaign) then he is literally rolling in success. If it is, however, to promote himself as an esteemed candidate for the US Congress and to provide people with information about his views then, I am afraid to say, the site fails miserably. I cannot see how anyone could possible make sense of anything advertised on this page. I am getting a headache simple looking at it. (I have now minimized the site, finding the illuminated text extremely distracting and off–putting… Sorry George, your site is just too hot!)

Websites are highly useful tools, which can lead to increased popularity, awareness and interest in whatever it is the site may be advertising. However, simply wanting or having a website, just for the sake of it, could be detrimental. One must first decide why a website is needed and then tailor that site to suit the need, whatever that may be. I can’t help but feel that George Hutchins may have skipped over this vital aspect of the design process. The result of such an oversight, is evident – a confusing and over-complicated site, which could be actually offensive to any graphic designer or design appreciator.

What if, however, the site was purposefully designed to be ugly, over-complicated, confusing and absolutely mind-blowingly in-your-face! It is definitely grabbing my attention and literally screaming GEORGE HUTCHINS FOR US CONGRESS! Even from its minimized position on my desktop, I can still see these words blaring out at me. Not knowing anything about George Hutchins (other than he is a Republican from North Carolina, who is running for Congress for the second time), or his ideals/target audience/goals/personality, I cannot comment on the ‘success’ (I guess you could call it that) of the site. I can however, give my highly uneducated opinion; this sight is a visual displeasure, a headache-causing shamble of illegibility. Do you agree? 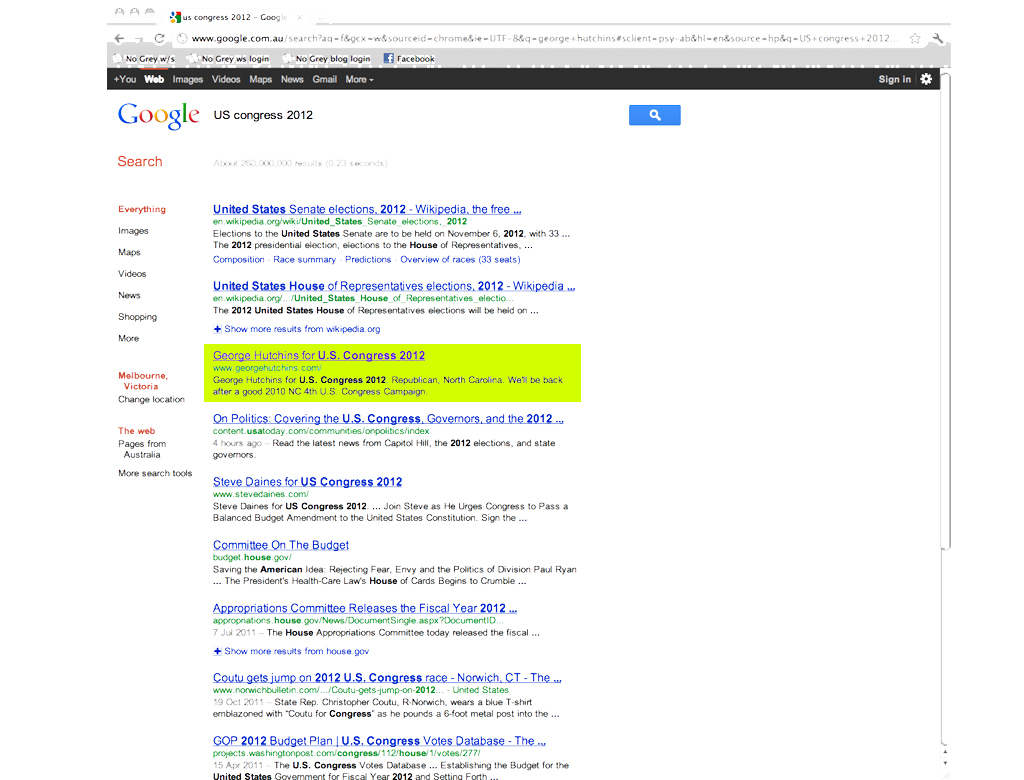 Having said this (my scathing reviews always have a however attached to them), I was über surprised to see, that George Hutchins is doing quite well in the Google-search department. I have recently been introduced to the Google key-word analysis (I am embarrassed to say I have already run an analysis on my own name…). ‘George Hutchins’ gets 880 global monthly searches (not a bad effort), and for thanks to the poor-spellers in the world, ‘George Hutchings’ gets a further 880. Even more surprising though, is the fact that his site pops up on Google (quite high on the list I may add) when ‘US Congress 2012’ and ‘Republican candidates 2010’ are searched. Looks like George is getting more relevant attention than I initially thought!

I guess we can all learn something from George Hutchins site – albeit in absolute eye-sore, it actually is reeling in some relevant business. Imagine how hot things could be if Hutchins implemented a graphically pleasing website, which, rather than overwhelming viewers with a myriad of utter chaos, clearly explained and communicated his political views and plans for the US. Who knows, he may even become the next US President!